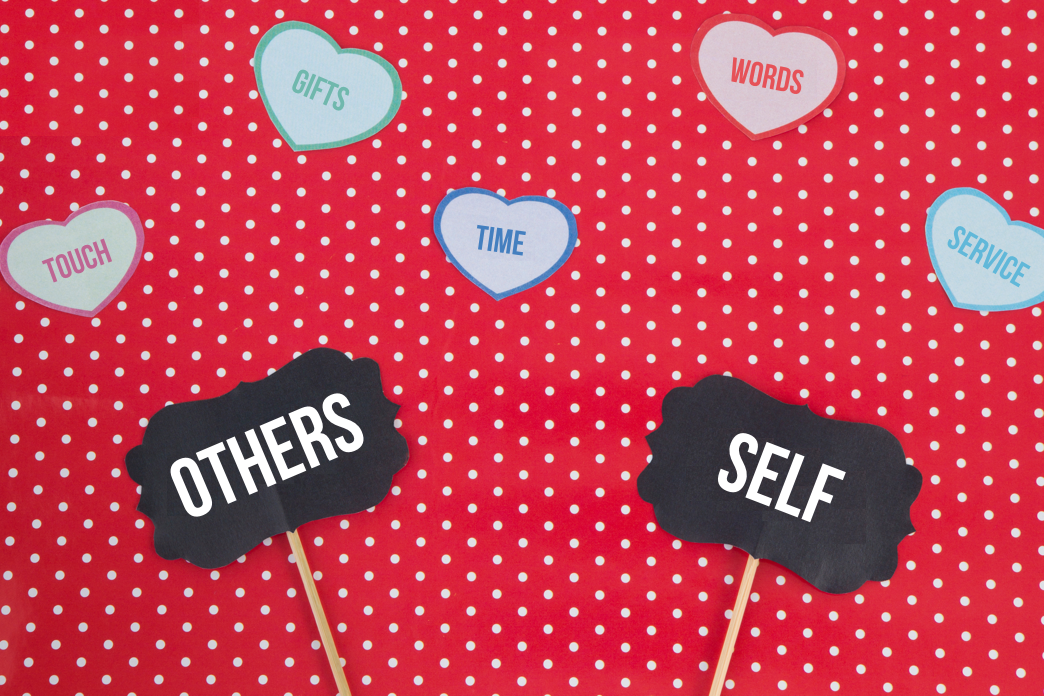 So, we talk a lot about love languages in discussing how we can treat our partners and friends, even kids.

However, I saw a meme going around talking about how our love languages might be tied into the kinds of self-care we practice as well, which is an intriguing thought.

That ONE Thing You Didn’t Do 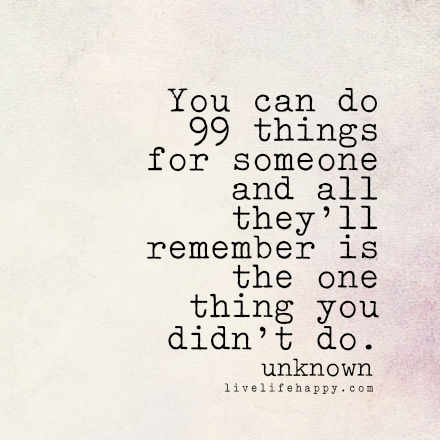 I saw this meme on FB the other day. It said, “You can do 99 things for someone, and all they’ll remember is the one thing you didn’t do.”

It made me a little sick to my stomach.

Because I CAN see both sides. I know people who are constantly looking at life through, “Why didn’t I get this?” glasses. The ungrateful ones.

I also know what it means to have someone do 99 things for me, and have them all be the WRONG things, things that don’t matter. Things that don’t inspire me to feel loved, but instead inspire feelings of:

And regardless of your good intentions (if there are any), if what you do “for me” makes me less happy, in love, and overall satisfied with life than if you’d done nothing, well, then, I don’t want them, TYVM.

I’ll take the one thing that would show me you really care in a way I can receive it.

I choose to leave the ungrateful people out of my life.

And rewrite that meme:

You could do 99 things that don’t matter to some, and leave them wishing you’d done the one thing that DID matter.

I’m a hugger from way back. To me, hugs are like mini-cuddle sessions, acceptable for the public. And I love cuddling, too.

The BEST hugs are long, include a lot of body contact, and done with little to no clothing with someone I’m deeply intimate with, but even the runners-up can make my day better damn near instantly.

A few weeks ago, I found this image on Facebook:

I reposted it, mentioning I was not sure about the numbers, but that it sounded good to me.

And really, I posted it because I wanted to remind myself to go out and look for the numbers. Because the science of hugs as a topic for a writing had a nice ring in my head.

After all, as I said, I am more than a tiny bit of hug junkie.

Hell, as I retold this weekend (for the umpteenth time), I really NOTICED Pet on the night we met when he hugged me goodbye. He just felt so damn…right.

With the hug, though, it was as if suddenly my hormones were jarred awake, “Was that an explosion? Sex? Magic?”

He likes to joke he put a spell on me, and I like to joke it worked. I’m never sure we’re really joking, but I digress.

And so, science it is! After all, I love my imagination, and I do believe in the placebo effect (It’s awesome powerful, y’all!), I also wanted to see what science has been done around hugs, and what it can tell us.

I’m already a hug addict. I admit this. Now, I just may become a zealot. Get this:

Hugging boosts oxytocin, which bonds you to others, connects you, and makes you feel loved (more on oxytocin). Oxytocin also has anti-inflammatory benefits (source). Inflammation in the body has been linked to certain types of depression (MDD especially, although science can’t fully explain it all, yet: source).

Hugging also gets dopamine and serotonin production going in the body.

Dopamine is a hormone which is part of the brain’s reward mechanism, and makes you feel pleasure, like you did a good thing. The more dopamine you have, the less potential for addiction. (About dopamine.)

Serotonin is responsible for helping balance mood. It helps to make us feel happy, relaxed and confident. It also acts as an appetite controller. Too little serotonin is linked to depression. Hugging is known to boost serotonin levels. (About serotonin.)

Conflict weakens your immune system through stress, and hugs connect us to others and reduce the effects of conflict. Not only do people who receive more hugs get sick less often, but they don’t get as sick and recover more quickly.

(Primarily in women studies show, this is being researched further.)

Hugging releases oxytocin in both men and women. In women, specifically, this seems to lower blood pressure during times of stress. (source 1, source 2)

Being touched, even briefly, can reduce fears of death and other existential issues. Hugs are a penultimate of touch. (source)

But what about those numbers?

Indeed. After all, that’s what I wanted to be sure to research.

9.3 seconds for the “average” hug? That seems long. Ever counted off 9.3 seconds while hugging? It’s an abnormally long period of time, or so it seems right then.

And when researching “how long should a hug last?” I was bombarded with both the 20-second rule (which I’ll get to in a moment) and a 3-second rule for “public” hugs.

You read that right. People have decided that there is an actual number of seconds it’s appropriate to hug another person, and it’s three seconds.

Which is a far cry from 9.3. And “how long does the average hug last?” search got me similar results.

So, searching “average hug 9.3 seconds,” I get nada on that number. I think someone pulled it out of their butt.

The same thing happened when I tried to find information on how often people crave hugs per day. I’m not sure how scientific a number that might be, either.

As for the 20-second rule, it’s so everywhere online, it’s difficult to find the originating information. A study done in 2003 suggested that couples who held hands for 10 minutes while watching a romantic video, then hugged their partners for 20 seconds had better blood pressure readings than the control group.

Which is definitely something. However, it’s doesn’t determine how long a hug must be to activate benefits. And at least two articles suggest that 6 seconds and 10 seconds will do nicely, as well. (source, source)

Unfortunately, neither of those link to scientific studies, either.

So, in light of all this, I’m going to make a few suggestions regarding hugging, and perhaps you can find out what works best for you, with your own self-study.

I’ll start with that last bit.

Regardless of any other information, all of the articles I read, if they mentioned WHO you should hug at all, mentioned that the benefits of hugs come from people you want to hug and who want to hug you.

So, consent is a key.

It seems kind of obvious that being hugged against your will or by someone you don’t like will do more harm than good, but I think it’s worth saying, in case someone misses that idea.

Also, it was mentioned that because hugs can release these bonding hormones, choose who you hug carefully, in case you want to maybe not feel so close to someone who is not right or good for you, which is an interesting take.

Of course, because you are an amazing person who surrounds yourself with amazing people you enjoy, hugging the right people more often is going to benefit you through multiple chances for really good natural drugs/hormones, produced by your body and brain.

And as far as hug long goes… well, hug those you love as long as feels comfortable—and cuddling counts! Cuddles are just really long hugs, so take advantage of some health benefits while Netflix and chilling, or whatevs.

And those 3-second hugs? No need to turn up your nose or poo-poo them.

After all, even a 1-second hug done with warmth and sincerity can boost mood and happiness, and increase feelings of inclusion.

And for those whose love language is touch, even the quickest touch can make a BIG difference.

What are your experiences?

What are your experiences with hugs? Have you found that you crave them when you don’t get enough? Do you feel noticeably good or better when you get more hugs than usual or from specific people?

Have you done any of your own research into hugs? Anything I missed? 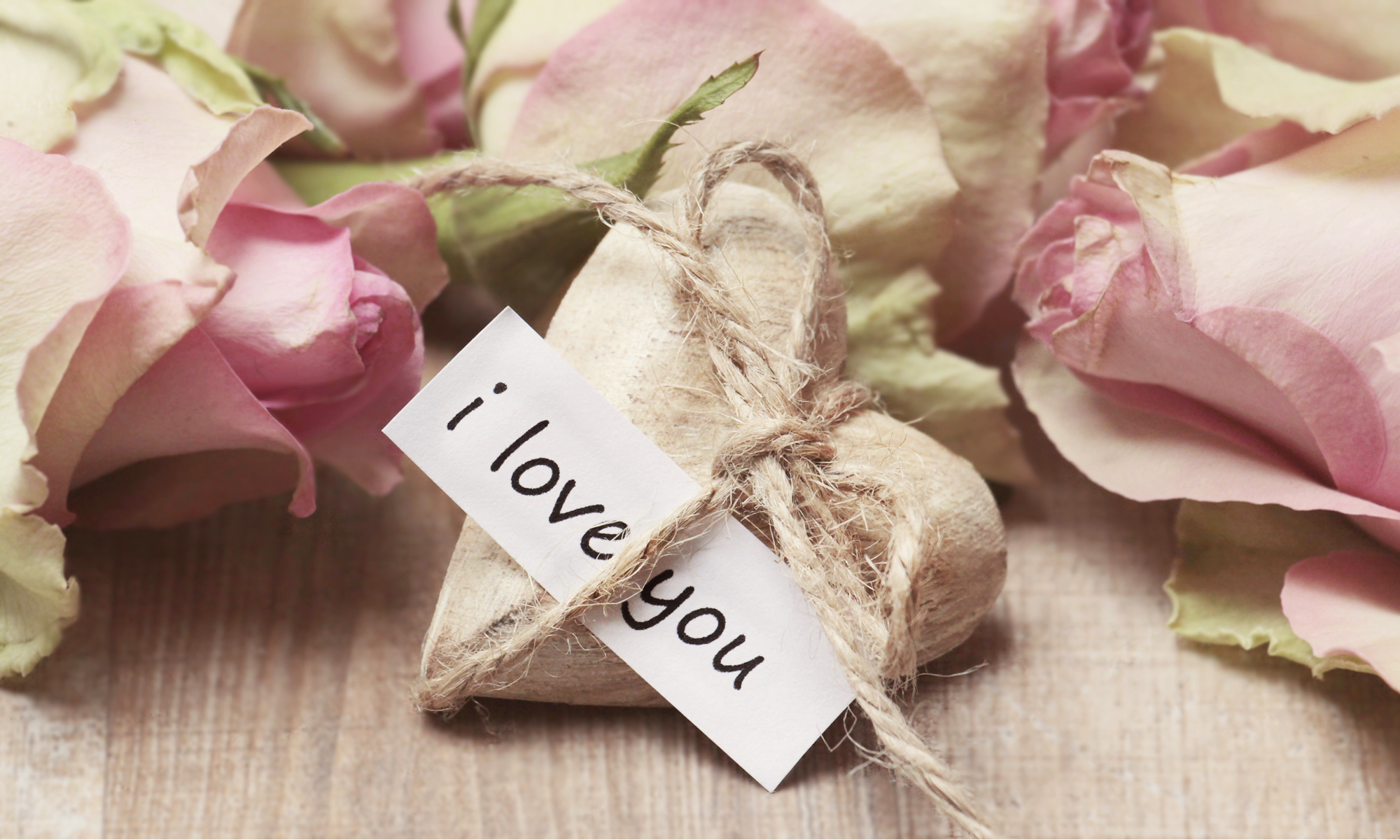 I’ve written before that I Don’t Judge How Another Loves Me, and I believe this. I also say, though, that I do judge how someone makes me feel.

Or how they SHOW me that they love me in ways I can understand.

I saw a saying like this on FB, and it really hit home for me.

After all, I think we’ve all made the mistake of doing the exact opposite of showing our love, even while we love deeply and fully and (dare I say?) desperately.

However, simply loving someone is not enough.

No matter how deeply.

No matter how desperately.

It’s far more important that they feel loved. At least to them.

And that brings us around to a few phrases that look at both side of this:

How much does the feeling matter, if the actions don’t back it up? Are “good intentions” enough? Is action a good indicator of feelings?

How do you gauge another’s intentions?

Image by pixel2013 on Pixabay