It’s Not Cheating: Mono/Poly: it’s not a hopeless train wreck! 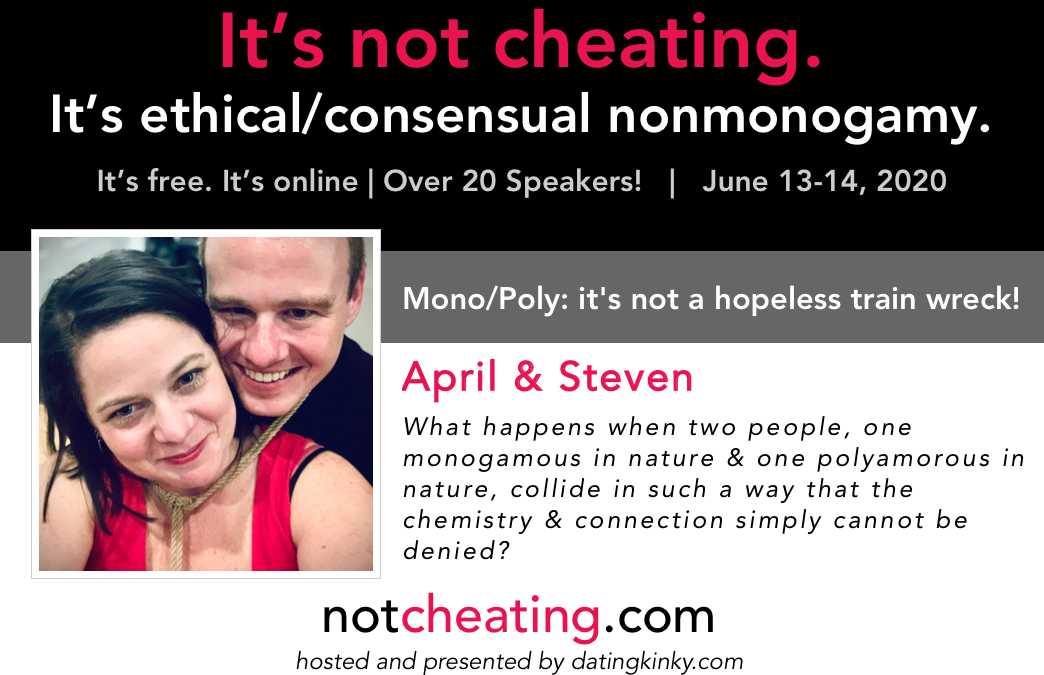 What happens when two people, one monogamous in nature & one polyamorous in nature, collide in such a way that the chemistry & connection simply cannot be denied? Most books & blogs will tell you it’s not impossible, BUT it’s not going to be easy either. Neither being the type to back away from a challenge, April & Steven hopped on this train a few months ago & so far have managed not to go off the rails.

Hear how they’ve successfully navigated the challenges inherent in this unlikely pairing, including how the monogamous partner has worked to healthily adapt to an open relationship style & how the polyamorous partner balances all his relationships (including a D/s one). Opportunity for live Q&A & a share-out of helpful resources & materials/exercises.

April is a therapist & clinical training director who specializes in anxiety, OCD & autism. Steven describes her as an intelligent, introverted, endlessly curious, totally sane cat lady, who is not one to shy away from a challenge. She’s new to both the kink scene & polyamory relationships (while still identifying as monogamous-in-nature).

Steven works in tech & co-parents in a platonic marriage while also maintaining other romantic relationships. He comes from a non-hierarchical poly relationship style. April describes Steven as a smart, optimistic romantic with masterful communication skills & a gift for making those he engages with feel seen & appreciated.

Both are active in the Chicago kink community & have a keen interest in Shibari as well as strong switchy tendencies. They share a love of acquiring/sharing knowledge & are excited to interact with anyone who joins us in our session!