Start As You Mean To Continue, In Vignettes 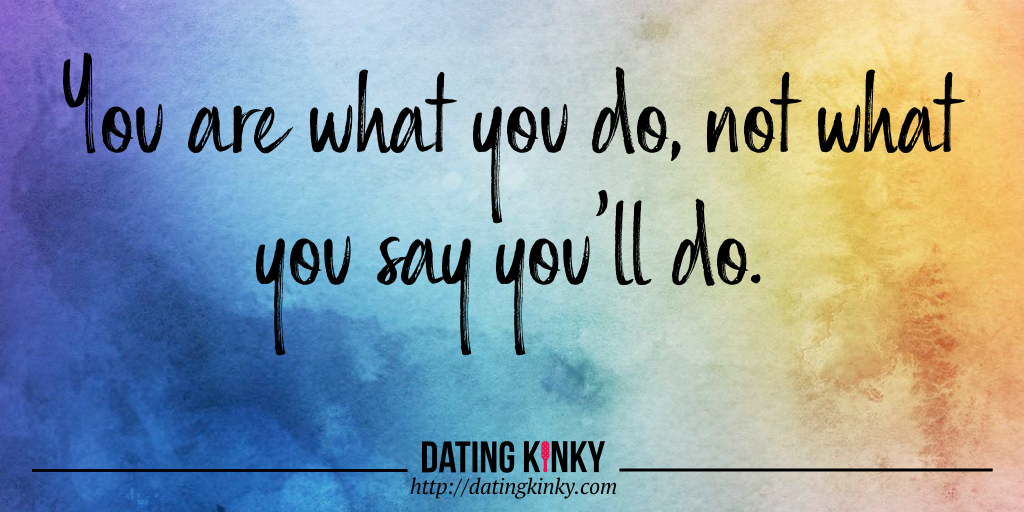 One night last year, I met a kinkster from out of town for some tea and chat, and the topic of making a real connection came up.

I said that if you aren’t open and honest from the beginning about who you are, you’re crippling your potential relationship.

The moment you lie or prevaricate or cover up, you’re beginning a pattern of fear-based behavior that is incredibly hard to overcome inside that relationship or outside of it.

Be upfront, and find the people who want what you want. Don’t try to pretend to be someone else to get something that will never fully meet your needs, just to have it.

A few days later, someone posted on a lifestyle page on Facebook about their dominant who was great for 2 1/2 years, but then “fell in love,” as they explained it, and now they don’t do the things that brought them together to begin with.

It’s not fair to lure someone into a relationship with one person and to then actually be another.

(Yes, I know no one is entitled to choke-em-out-wrassel-em-down-fuck-em-hard sex. I’m not saying that. I’m saying be yourself. Don’t PRETEND to be a nasty-ass dom, then go soft and fluffy because it was all an act that you could only pull off when you really didn’t VALUE the person you’re with.)

And then there is the story of the partner who used sex to get a relationship, then once they had it, admitted that they never really wanted it for themselves at all, but were doing it to attract their partner.

And before you say that doesn’t happen, it does.

Here is someone who wrote about it: I’m The Woman That Stopped Sleeping With Her Husband Completely, Here’s Why

I really don’t understand the casual cruelty of this.

Like, I TOTALLY GET that no one deserves sex from their partner. I said that ^^^ up there.

However, it’s also obvious to me that it’s wrong for people to use sexuality to “land” a partner, then once married with children or financial entanglements, to simply take it away.

So, today, I’m suggesting that when looking for a partner, determine what you want from life, and create a relationship based on that.

On what is realistic.

For example, if you’re a fan of cities and civilization and hate bugs, don’t pretend you love to go primitive camping just because the new twinkle in your eye enjoys that.

Create a relationship where you enjoy your vacations to your various places apart, or trade off, rather than pretending until it causes resentment and is taken off the table with no warning.

Or, if you’re a homebody, and your new flame is a party animal, set your personal boundaries early on with what sorts of socializing you want to do, and how often you’re actually willing to do them.

For me, that’s about 2x per week, max. For my partner, that could be 5 nights a week, easy.

I never pretended I could keep up with him, or that I wanted to, and I enjoy my nights alone.

Don’t take up hobbies that you know you already hate, don’t plot to do things “until you’ve got them,” and never, ever fake enjoyment or orgasms.

Build a life you can love as much as you might love your partner by being honest and authentic.

And hopefully, you can expect the same from them.