Nonmonogamy: I do what I want.

Nonmonogamy: I do what I want. 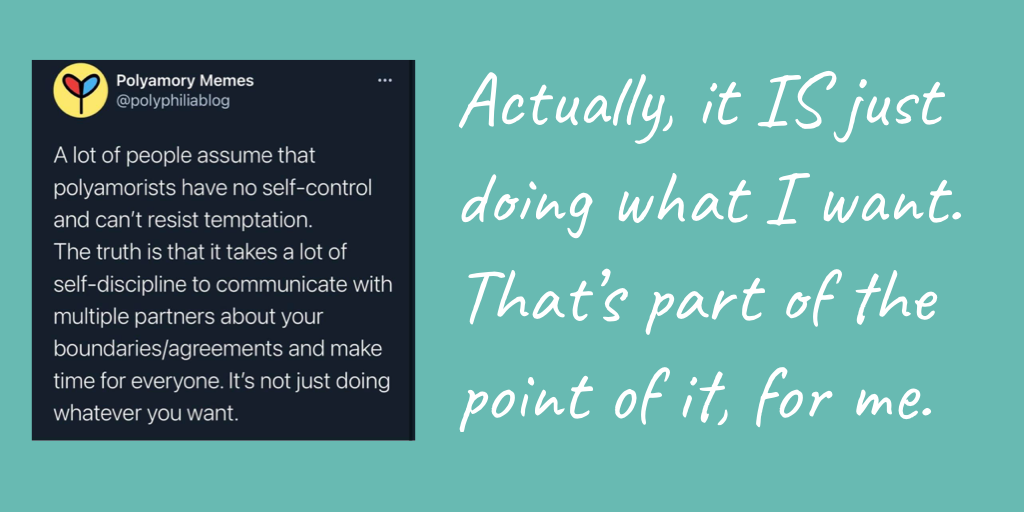 This clipped post seems pretty benign at first. Even TRUE.

Obviously, because it’s been reposted and clipped and shared by many.

And that troubles me.

Because the wording in this makes a lot of assumptions and statements that I find deeply problematic.

First of all, I do not doubt the good intentions of this post. Not at all. Polyamory and other types of no monogamy are constantly asked to “prove” that they are valid, or worthy of existing.

That they are not just euphemisms for immoral behavior.

Which, in and of itself is a deep problem.

Haven’t we been through this enough with LGBTQ culture? When will we realize that the “moral world” will never approve, and just be?

Because when we try to justify our lives to others, we leave out people that matter. We gatekeep. We exclude.

It is inherently invalidating polyamorist who don’t have self control. Who choose not to resist temptation. Who do whatever they want.

As if those are not valid choices for them.

Being that way is not inherently wrong or bad, as this message assumes.

In fact, I would suggest that doing EXACTLY what you want is more good than bad, but it’s actually much closer to neutral overall, and depends on what you want.

So, doing what you want could be bad in the first instance and good in the second. You see?

And where would doing something that OTHER people want of you, but that you don’t want, and actually hurts you fall, in case like this? I’d say that’s bad, and that doing what is good for you (and what you want) is the better option, even if others don’t approve.

Because do we really need to seek others’ approval of our relationships?

This subtly suggests that there is WON TWOO WAY to poly. Which is untrue. For some poly/nonmonogamy is ALL about doing exactly what they want, and as long as they are being ethical, who are we to say it’s wrong?

And last, and this is perhaps the most insidious part of this—the part I hate most—the part that feels like it comes from a place of inherent ick.

This post makes it seem like communicating with your partners requires self discipline AND that it is not included in “whatever you want.”

Sure, that may be true for some people.

Some people may not WANT to communicate and negotiate and set boundaries and agreements.

And I would say that is their right.

And the right of anyone to choose whether to be in a relationship with them.

However, Most of the amazing people I know in all forms of nonmonogamy LOVE interacting with their partners through communication.

They look at it as a privilege.

Something they GET to do with these multiple amazing, wonderful, incredible, sexy, (insert-all-the-best-adjectives-you-can-think-of-here) people.

It’s not resisting any temptation.

And they learn about how to do it better in the same way they might take cooking classes or tennis lessons, or join book clubs.

Because they can’t get enough of how it adds so much positivity to their lives.

And when it comes down to it, I want to be in relationships with people who are doing EXACTLY what they want with me.

All in all, I think that the way I read this message is more harmful than good. And that’s NOT to say that how they intend it. Like I said, I suspect it’s good intentions and healthy thoughts that created the original.

It’s not just for me, the way it stands.

What about you? What are your thoughts? 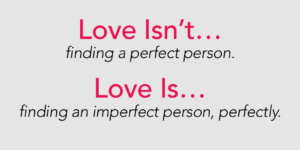 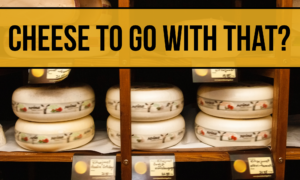 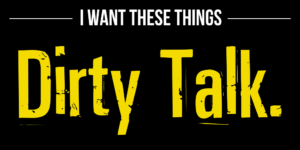 There is just something about dirty talk. About hearing some delightfully naughty words whispered in your ear, or whispering them in someone else’s. It’s powerful. 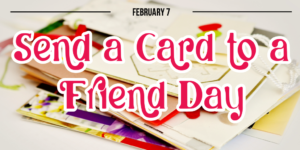 It’s lovely to know someone is thinking of you, right?

Today’s holiday is a great day to let someone you care about know that you are thinking about them. By sending a card. Now, you 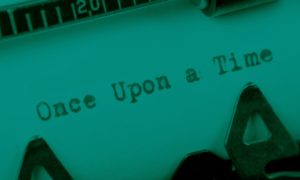 I Live My Life In Stories

Not just because I’m a writer, although that certainly exacerbates it. Something happens, and I build my stories around it… some call them memories. I

Poly-Wha? Ethical Non-Monogamy For Everyone

Polyamorous, open, swing, poly-fidelous, monogamish… so many ways to say that you enjoy ethical non-monogamy, or more than traditional one-on-one coupling. But what does it 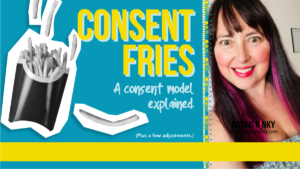 Consent FRIES (and a bit more.)

Consent is key in kink, but I also maintain that it is key in life. And, if you’ve been following me for long, you know